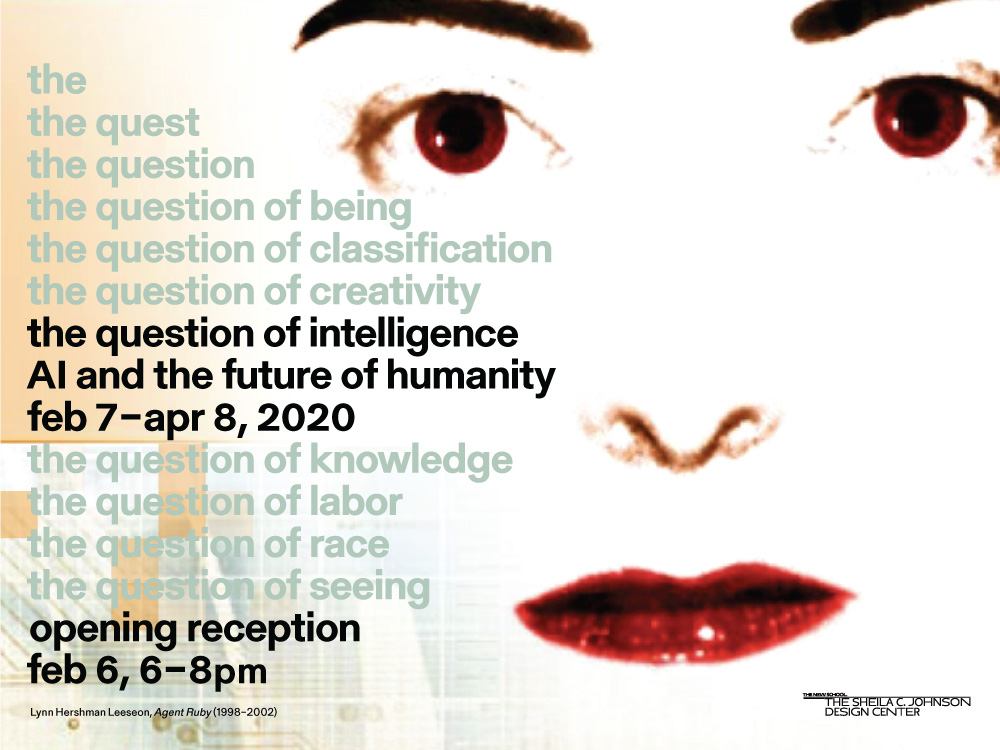 The Question of Intelligence - AI and the Future of Humanity

Over the past years artificial intelligence has moved to the center of technology discussions due to the rapidly increasing role of ‘machine learning’ in data processing and decision making for the purposes of commerce, labor, surveillance, and entertainment, among other areas.

The Question of Intelligence features works in a range of media by more than a dozen artists, exploring what constitutes intelligence and if and how it can be constructed by algorithms and machines. The exhibition gives a conceptual overview of different ways in which digital art has critically engaged with developments in artificial intelligence, and investigates the social and cultural transformations generated by AI.

Presenting a body of works that address the effects of the automation of our senses, The Question of Intelligence investigates vision as it is reflected in image recognition; speech and voice in relation to issues of sentience and personality, as well as the construction of knowledge. Some featured artists explore how AI learns to see and classifies images, exposing bias and contextual misunderstandings. Another group of artworks engages with the impact of automation on creativity and labor, which has generated both utopian and dystopian predictions. AI that takes creative labor to new forms of expression has become a trendy topic, while the replacement of human labor through AI already has serious socio-political consequences.

Together the works in the exhibition examine and juxtapose the ability of humans and machines to acquire and apply skills and knowledge, raising questions of what the encoding of ‘intelligence’ means for the state of being human.

Curated by Christiane Paul and organized by the Sheila C. Johnson Design Center. The exhibition will be held from February 7 to April 8 at the Kellen Gallery in New York.

Practical info
The Question of Intelligence – AI and the Future of Humanity
Kellen Gallery, 2 West 13th Street, New York, US
Opening 7 of February until 8th of April 2020

The exhibition is made possible, in part, with the support of the Flemish Government.